An examination of 1984 Mid South Wrestling.
Posted by Mark Coale at 4:18 PM

Not a hoax. Not an imaginary story.

Debuting at the Baltimore Comic-Con.

Article by Dr. Lucha Steve Sims in the issue.
Posted by mark coale at 12:33 AM

Out with the Old Year, In with the New Year 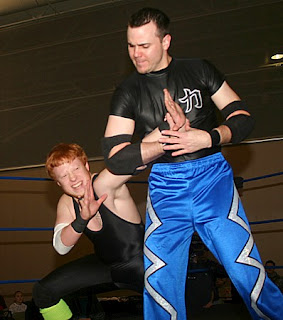 As the saying goes, "Nothing in life is certain except Death and Taxes." A third thing is that one or twice a year, we're going to a sit-down interview with CHIKARA founder "Lightning" Mike Quackenbush. This time, it's a look back at an adventurous 2008 CHIKARA season, which saw the company run shows around the world and a look ahead to the start of their upcoming eighth campaign. This interview was conducted via email in early January 2009.

Posted by odessasteps at 3:42 PM

In preparation of CHIKARA's second New England tour this week, ODESSA STEPS MAGAZINE wrestling editor DOCTOR ALQUIMIA had a chance to sit down and chat with an old friend, the diabolical genius Ultra Mantis Black, leader of The Order of the Neo-Solar Temple. Many people know of his prowess in the wrestling ring, but not everyone might be aware of his fondness for the National Pastime. They chatted (via email) recently about the recent World Series win by his Philadelphia Phillies, as well as some squared circle issues.

Q: Were you optimistic of the Phillies' chances for post-season success when the playoffs started? Almost none of the "baseball experts" picked them to make it to the Series, let alone win it.

A: Surely you jest! My dear, close personal friend J-Roll had dubbed the Fightins' "the team to beat" at the start of the 2007 season. Clearly his premonitions were merely following the metaphysical clock of a leap year.

Q: Were you expecting Tampa Bay to put up a bigger fight? Did you think the Phillies' pitching would be able to cool off Upton and Longoria and the rest of the Rays' hitters?

A: Tampa Bay, you see, is located in an inferior hemisphere - Florida. The temperatures are much too high and the people much too old for The Order's tastes. Therefore it was evident that their bats could simply not perform in the harsh, rugged, and handsome environment of Philadelphia. In addition, they were clearly cursed from the get-go when management foolishly decided to drop the "Devil" portion of their moniker.

Q: What were you thinking during Game Five of the World Series as the rains came down and then when the game was postponed?

A: "Intoxicating! The sacred tribal raindance of The Order is a success!" These words were of course formed in a word bubble over my head, Charlie Brown style.

Q: Were you around for the Phillies' World Series appearance in 1980, 83 or 1993? If so, how did the celebrations compare to those (not that there was much celebrating for the latter two)?

Q: Rumor has it there was a sighting of someone in an UMB mask partying in downtown Philadelphia after Game Five and the Phillies had won the Series? Can you confirm or deny?

A: I cannot be held responsible for any damage done to any businesses or automobiles during this time.

Q: Did being an evil insect overlord prevent you from going to the parade?

A: No man or beast could have prevented me from such. In fact, after the parade I was privileged enough to share a sparkling apple cider with my dear, close personal friends Jayson Werth and Pat the Bat, who we like to call "Bait". But that my friends is a story for another day.

Q: Onto wrestling matters. It's well-known that Vin Gerard and the Unstable are not popular in the tecnico lockerroom. How are they received by the rudos? Were you pleased to be picked for the Cibernetico, since it would give you a chance for more revenge on Hydra and Tim Donst?

A: The Cibernetico??!! Are you quite sure? I have not had the chance to check my answering service lately but surely there must be some mistake! I don't trust anyone inside or outside of a CHIKARA lockerroom but I do know that The Order is not yet finished with those treasonous snakes Hydra and Donst.

Q: How would you describe two-ought-ought-eight for the Order? Your ranks swelled but were then depleted by the actions of Tim Donst, Mike Quackenbush and your former protege Hydra.

A: We had our ups, we had our downs. We shared some laughs, we made some frowns.

Q: With the Order down to "just" you and Crossbones, will you be looking to expand in 2009?

A: The Order is always looking for new proteges, prophets, and soothsayers. Crossbones and I have determined that the best of course of action to meet our needs is to conduct some sort of televised "Star Search"-esque competition. We have already recruited one celebrity judge - the close, personal friend Mr. Jamie Farr.

Q: How has your relationship changed with the Golden Palamino Larry Sweeney, now that he is a tecnico?

A: I am merely the Palomino's spiritual advisor. He comes to me in times of crisis and I offer him my council. What he chooses to do with my advice is his own prerogative. Who are you to question his decisions?!

Q: There are rumors of that "CHIKARA stars of yesteryear" could be returning next month. Might this be any of your former acquaintances?

A: If you are speaking of former senior official Paul Turner, well I simply am not at liberty to divulge that information. The world is a weird, wild place.

Thanks to Ultra Mantis Black for the time. You can find his Myspace page here. CHIKARA returns to action this weekend in Framingham MA on Saturday and Wallingford CT on Sunday. For ticket information, go here. To talk about all things CHIKARA, go to the CHIKARA FANS website.
Posted by odessasteps at 8:33 PM

Is it that time of year again already?

Continuing what we hope will now be a yearly tradition, here's a few minutes with Mike Quackenbush, as CHIKARA gets ready for their Aniversario shows next weekend in Massachusetts and Connecticut. This weekend, the promotion will run shows in their traditional venues in Hellertown, PA and Philadelphia. The following interview was conducted few weeks ago via e-mail.

Upcoming CHIKARA shows include May 17 in Hellertown PA, May 18 in Philadelphia, May 23 in Framingham MA and May 24 in Wallingford CT. For more information, go to chikarapro.com or visit the Chikara Fans message board.
Posted by odessasteps at 10:49 AM

Chico vs Sweet and Sour

Fight Sport Midwest announced today that the long-awaited rematch between Larry Sweeney and Bryan Alvarez will be taking place.... in CHIKARA.

November 18th, in Philadelphia, for the last CHIKARA show of the year.

Expect a large influx of EMPIRE members for the show.

No word on if Bryan will be seconded by Vinnie V.
Posted by odessasteps at 6:09 PM

Up at the BEAT